The future of retail lies in retailers owning their own brand. New public management encourages a surveillance society. Two key takeaways from the lectures by our new honorary doctors. Anders Dahlvig, with 30 years of experience from the global world of Ikea, talked about the transformations of retail. Professor Irvine Lapsley talked about surveillance in the wake of New Public Management.

The transformations of retail and what it takes to succeed

“I have very fond memories of my years as a student here,” Anders Dahlvig said. “It set me off on a path that I could never have imagined. I’m very grateful for what the school gave me and how it shaped me.”

Anders Dahlvig has since his bachelor studies at LUSEM had a long career at Ikea, including positions as CEO, manager for Europe and head of Ikea in the United Kingdom. His success in the retail business is due to ”luck, timing, planning and opportunities taken”.

“It has given me a lot, giving something back to my old university,” Dahlvig said when he got the news about the honorary doctorate earlier this year. “We have done a lot together over the years, from research and student collaborations with Ikea to various boards and strategic issues that I have been involved in. Sustainability and responsible entrepreneurship are something that engages me and therefore I was pleased that this was highlighted in the nomination.”

Anders Dahlvig’s lecture was about the past, present and future of successful retail business.

“Yes, retail has been disrupted; digitalisation changes things. But the notion that this is the biggest thing that has happened to retail is, in my opinion, not entirely correct.”

He exemplified this by telling the story of when his parents bought their first car in 1958. The car changed the way that people travelled to the store. Until then, stores were located in small city centres, fragmented and often family-owned.

These two transformations were something that Ikea was an active part of. “Ikea was quick on the ball there. Back then, Ingvar Kamprad was a visionary and young leader.”

One of the most improtant keys to Ikea's success, according to Anders Dahlvig’s lecture, was owning the whole value chain. Today, the profit for the last retailer in the chain is very small but it is much bigger for the product itself. The challenges for retailers such as Ikea are how to transform and improve.

“Contrary to the other transformations, digitalisation is an area where Ikea was a bit late. Ikea is now developing logistics solutions for transportation to the customer, as well as new store concepts in the city centres,” Anders Dahlvig said.

He argues that digitalisation has been good for the consumers, with price transparency and the possibility to be able to buy products from anywhere in the world.

“But the challenges for the retailers have been huge, with profit levels deteriorating, especially for generic products and brands. The real winners in the future will be retailers that own their own brands and control the value and supply chains.”

Anders Dahlvig ended his lecture by saying that a real crisis is a great opportunity, as it triggers transformation and change. And if no crisis is to be had, it is always good to promote the younger staff at work.

“It is good to have young people in senior positions. They are curious and not afraid. They see things older people don’t. We should give them space and opportunity to act.” 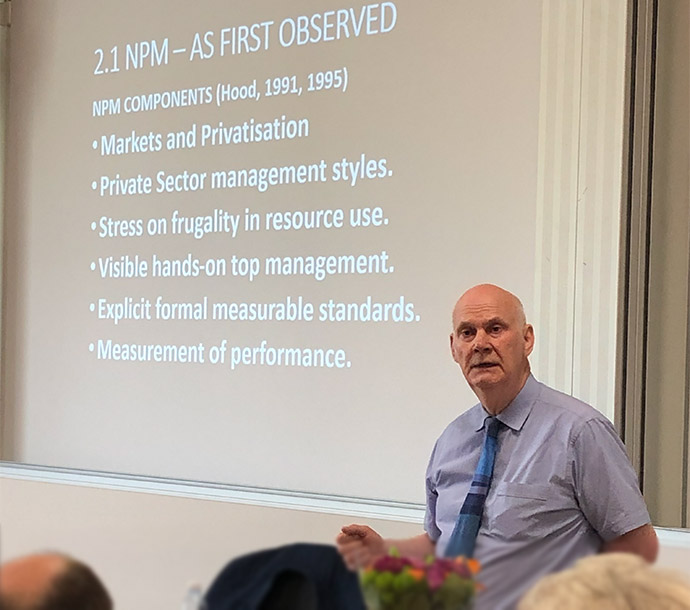 ”It is my absolute delight to be here in this wonderful city once again. Most of all because of the people. It has been my pleasure to work with you over the years,” Irvine Lapsley said at the start of his lecture. Then followed a crash-course in New Public Management (NPM), with special focus on NPM and its "unfinished business” in Great Britain.

Irvine Lapsley is professor emeritus at the University of Edinburgh Business School. He has also been an affiliated visiting professor in Business Administration here at LUSEM.

Lapsley argued that although NPM often has been a disappointment to policymakers, it is still used.

“NPM has been absorbed as the “normal way of thinking by a generation of public officials”. In fact, it has been rebadged as ‘modernisation’.”

With a focus on effectiveness, measurement and competition, NPM goes hand in hand with the current digitalisation and technology advancement policies in governance, Lapsley said. His key point was that while NPM transforms citizens into customers or consumers, the ongoing digitalisation makes yet another, unintended transformation, where the consumer is turned into a suspect.

“NPM and IT is firmly embedded in the UK government. This leads to the dark side of NPM, namely a surveillance society. But privacy should be a citizen right, it isn’t about having something to hide or not.”

The doctoral conferment ceremony is the major academic event of the year at Lund University. Ceremonies have been held since the late 1600s, with the ceremony taking place at the end of May/early June. Traditionally, the University's nine faculties together organise the doctoral degree ceremony. At the ceremony, the University bestows its highest honour on those who have completed a doctoral degree and defended their thesis.
The title of honorary doctor, doctor honoris causa in Latin, is a distinction which is awarded by a faculty. The honorary doctors are people who have achieved something of major importance for the University or for society, whom the faculty wishes to recognise and tie to its research community. Although often academics from other universities, honorary doctors can equally well be from outside academia. Every year, around 20 honorary doctorates are awarded by Lund University.
When and where: Friday 24 May 2019, 12:00 pm Lund Cathedral
Read more about our new honorary doctors at LUSEM

Read more about the conferment ceremony at Lund University